King of The Hill

“ CROBOTS ("see-robots") is a game based on computer programming...

Unlike arcade type games which require human inputs controlling some object, all strategy in CROBOTS must be complete before the actual game begins.
Game strategy is condensed into a C language program that you design and write. Your program controls a robot whose mission is to seek out, track, and destroy other robots, each running different programs. Each robot is equally equipped, and up to four robots may compete at once.
CROBOTS is best played among several people, each refining their own robot program, then matching program against program.

CROBOTS consists of a C compiler, a virtual machine, and a battlefield display (text graphics). The CROBOTS compiler accepts a limited (but useful) subset of the C language. The C robot programs are aided by hardware functions to scan for opponents, start and stop drive mechanisms, fire cannons, etc. After the programs are compiled and loaded into separate robots, the battle is observed. Robots moving, missiles flying and exploding, and certain status information are displayed on the screen, in real-time... „ 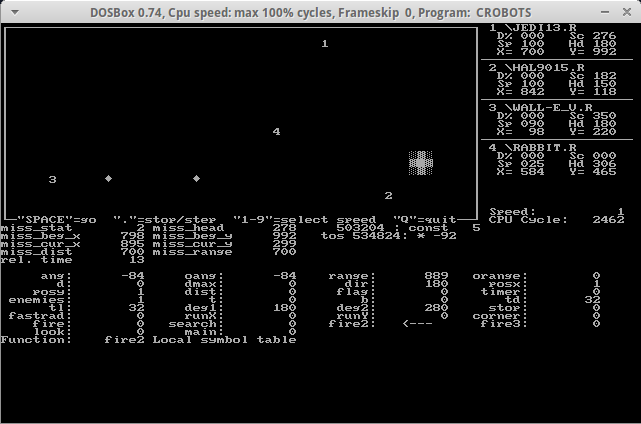 KOTH updated with robots from 2020 tournament.